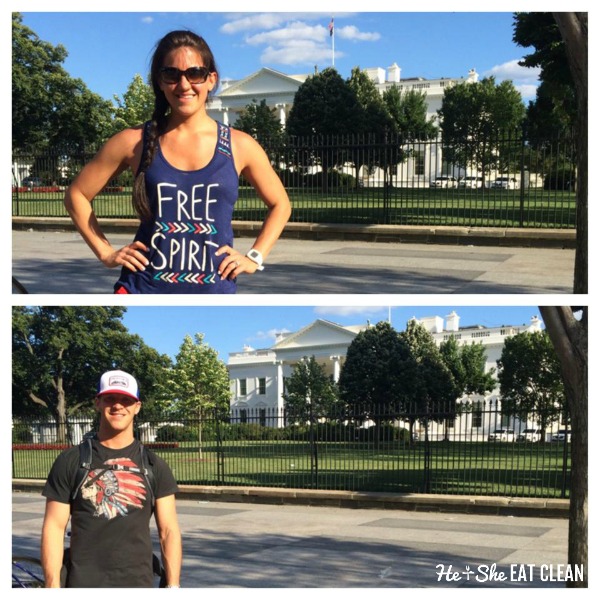 Scott had to go to Annapolis, MD for work so we, of course, went early to do a little sightseeing! I’ve never been to D.C. before and Scott hasn’t been since he was a kid so we flew into D.C. and stayed in Fairfax, VA Thursday-Saturday. Saturday we had to check into the hotel in Annapolis where Scott would be working but we still spent Saturday and Sunday in D.C.! We also used the opportunity to cross another National Park off our list.

Our plane departed from Atlanta at 6:40 Thursday morning. We got to the airport in what we thought would be plenty of time until we saw the line at the counter where you check your bags. On the Thursday before a holiday Southwest only had 3-4 people working the check-in counter. We waited almost 50 minutes in the line – I have NEVER waited that long. Then it was like Home Alone running through the airport to get to security. Luckily, the security line wasn’t too bad – it still took about 20 minutes. The entire time my head was racing and I kept thinking “We aren’t going to make it!”. They even put a “late check-in” tag on our luggage and said they wouldn’t guarantee it would be on our plane. I wasn’t really concerned about the luggage – I just wanted to get to D.C. but the cost of a ticket change kept going through my head – it was so stressful! We made it through security and THANKFULLY we weren’t pulled to the side to be searched. We then ran like we were in Home Along again to get to the terminal. We ran up the escalator and when I got to the top I thought my legs were going to die. We didn’t even have time to put anything back in or on (computers, belts, etc.) after security and I had just worked legs the day before. We ran up to the counter, frazzled, and the worker said: “Well, keep on running!” We made it with 2 minutes to spare! We were afraid we wouldn’t have seats together since Southwest doesn’t have assigned seating. Well, we get on the plane and we are 2 of 16 passengers! It all worked out great and we basically had the entire plane to ourselves! I took a short nap across the row I was sitting in.

As soon as we landed in D.C. (thankfully our bags arrived with us) we picked up the rental car and headed straight to Arlington National Cemetery. I was so moved by the Tomb of the Unknown Soldier. It was humbling and amazing to watch.

After Arlington, we went to Old Town Alexandria to eat lunch before Mount Vernon. Old Town Alexandra was so neat! I loved it there. After eating lunch, we went to Mount Vernon and walked around (and bought “limited edition” George Washington whiskey – which is for sale if you want it!) for a little while before our tour started. The tour was of George Washington’s mansion. We also were able to tour the gristmill and distillery. It started raining at the end of our mansion tour so we left and headed to the hotel to check in.

We aren’t too big on crowds so we knew we didn’t want to spend the day, Independence Day, in D.C. with a million other people so what did we do? We planned a hike! We woke up early and drove to Shenandoah National Park. The drive there was absolutely gorgeous. We did Old Rag Mountain which is more of a rock scramble than a hike. It reminded me a lot of the Tallulah Gorge hike I did last year in Georgia. Parts of it were pretty scary! We did the 9.5-mile hike and then headed back to the hotel. 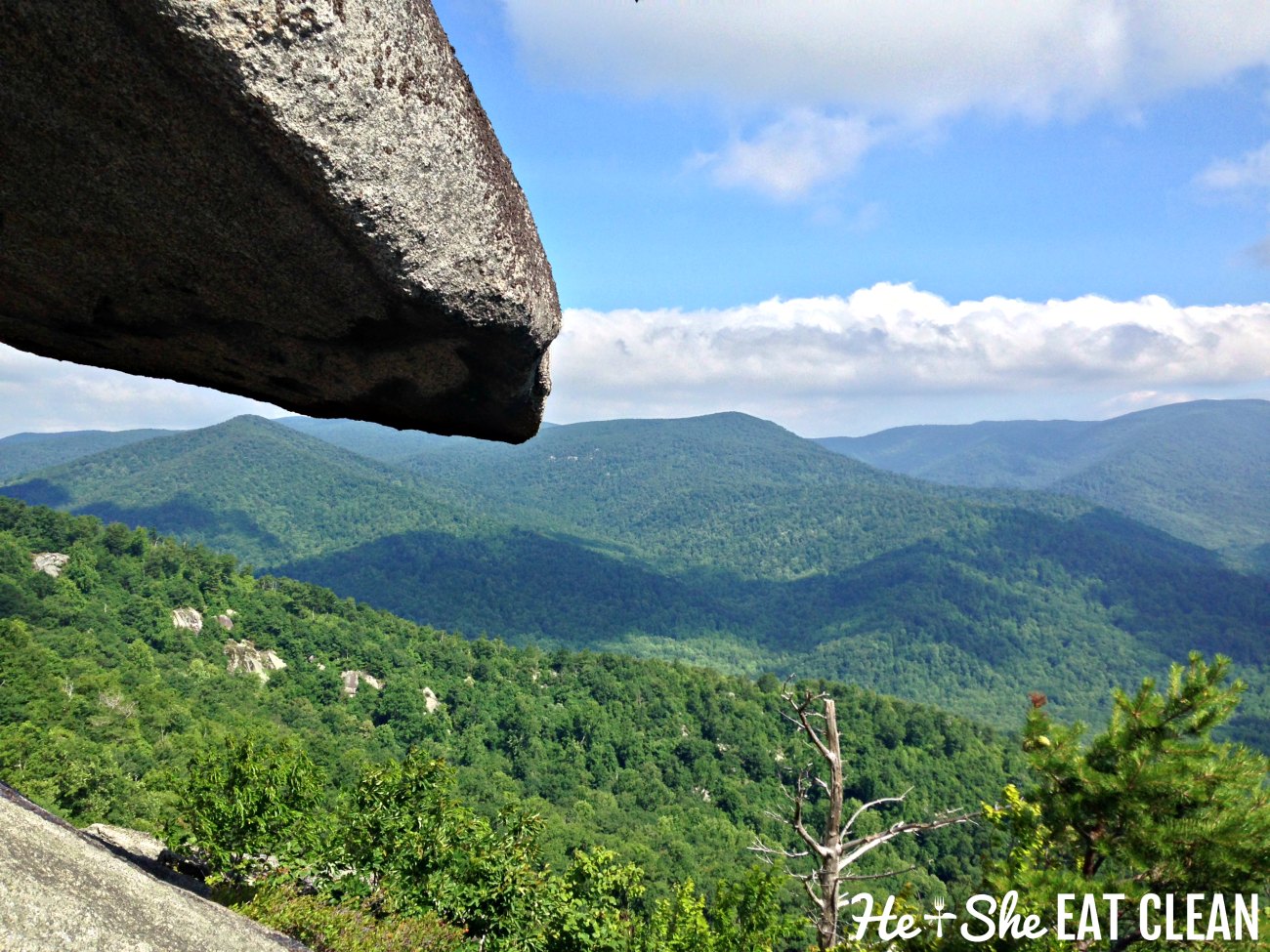 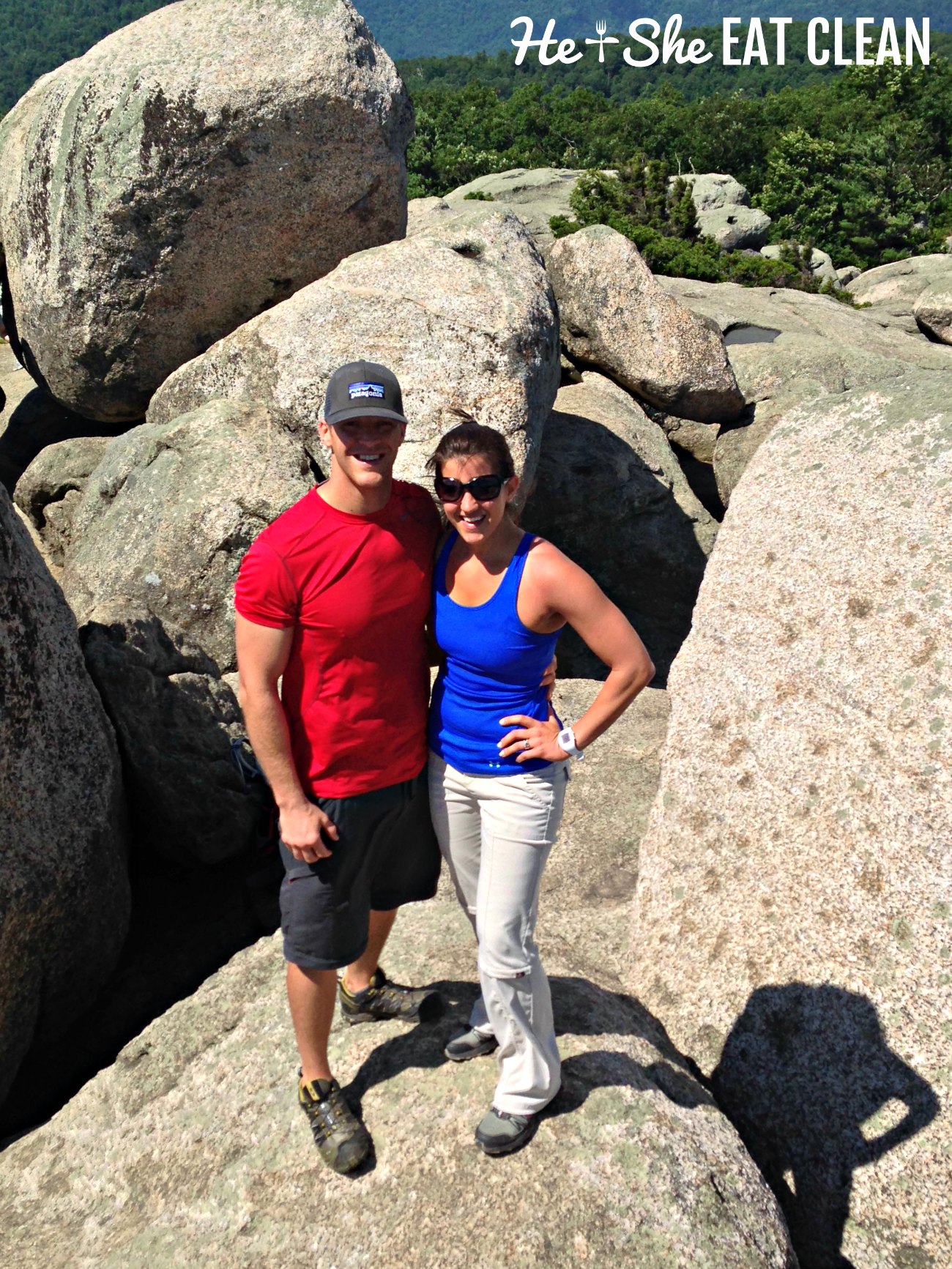 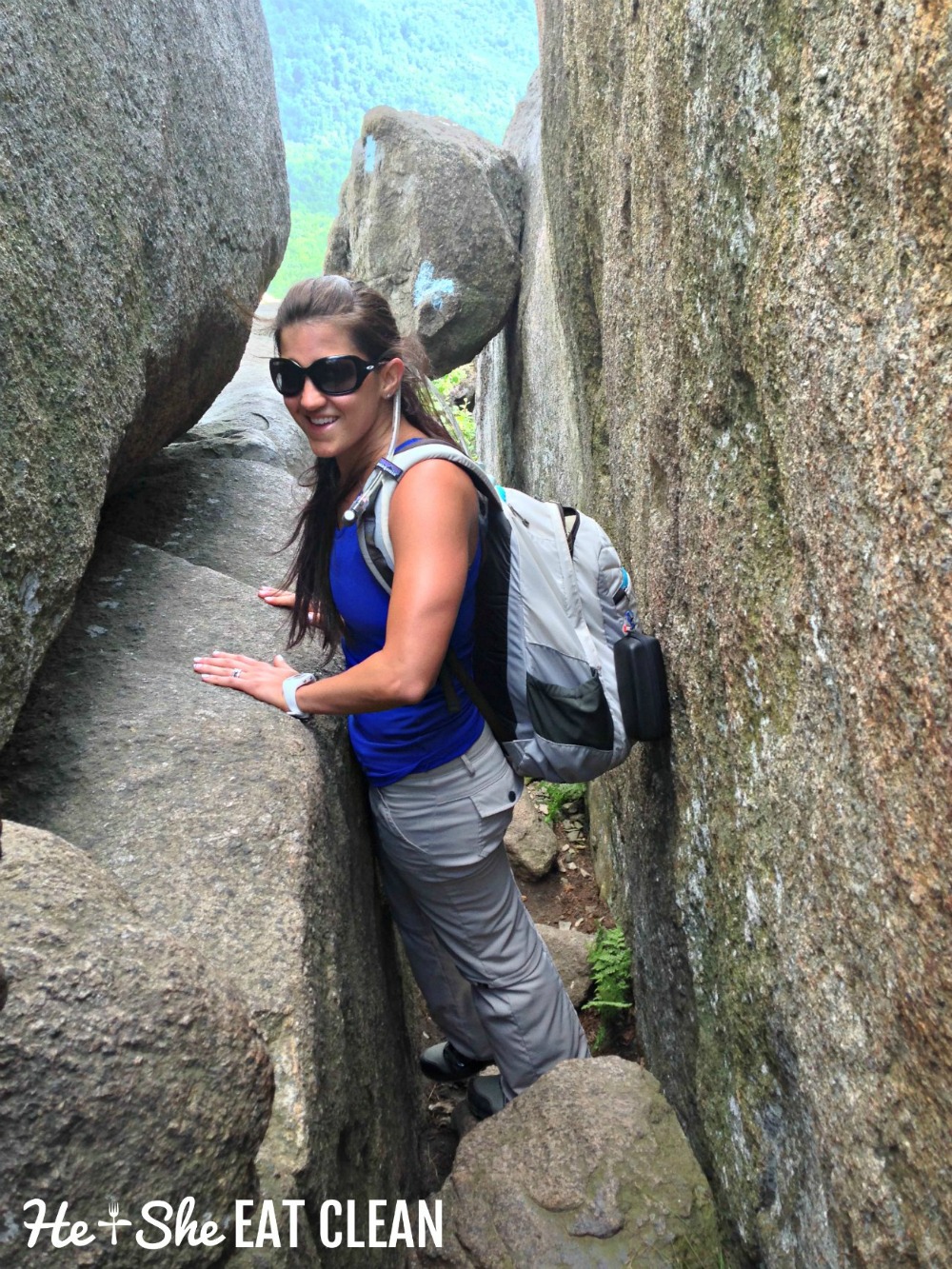 We left to go to D.C. around 5:30 PM. Our first stop was The White House. Then we just walked around and stayed at the Thomas Jefferson Memorial to watch the fireworks.

Scott and I are not really museum people but we wanted to go to a few of the Smithsonian Museums. We rode the Metro into town and first went to get tickets to the Holocaust Museum. After getting our tickets we went to a few of the memorials before our tour of The Capitol at 12:30 PM. The Capitol was pretty awesome but so unnecessarily extravagant in my opinion. After The Capitol, we headed back to the Holocaust Museum. Scott really wanted to rent bikes but I wouldn’t because I was still scared of them since I broke my leg when I was little! So after another long day in D.C., we headed to Annapolis, Maryland to check into our new hotel.

Sunday we still had the Natural History Museum that we wanted to see and some of the monuments on the other side of The Mall. I finally caved into renting the bikes so that we could do everything much faster since we were going to the Nationals vs Cubs game that afternoon. Well, we rode bikes everywhere! We ended up taking the Metro to the game but then rented bikes after the game to get back to the city. We stayed on the bikes for another few hours riding around The Mall and back to The White House. So now I have a new obsession!  I’m all about bike riding now! The Cubs lost but it was fun going to a new stadium (and checking another stadium off of our list!). 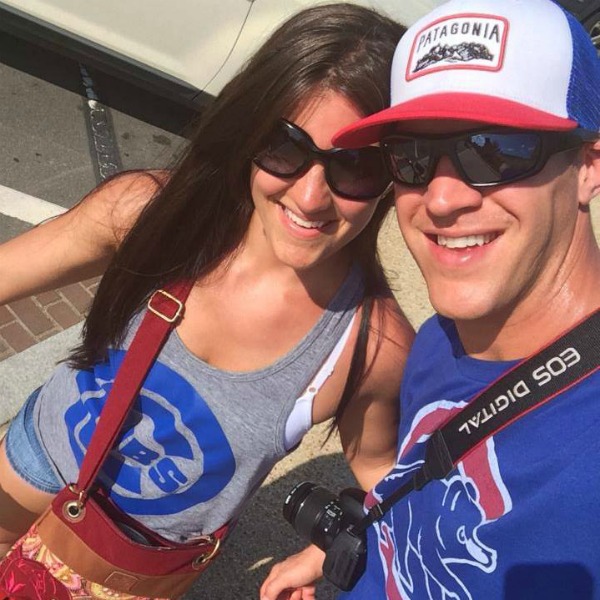 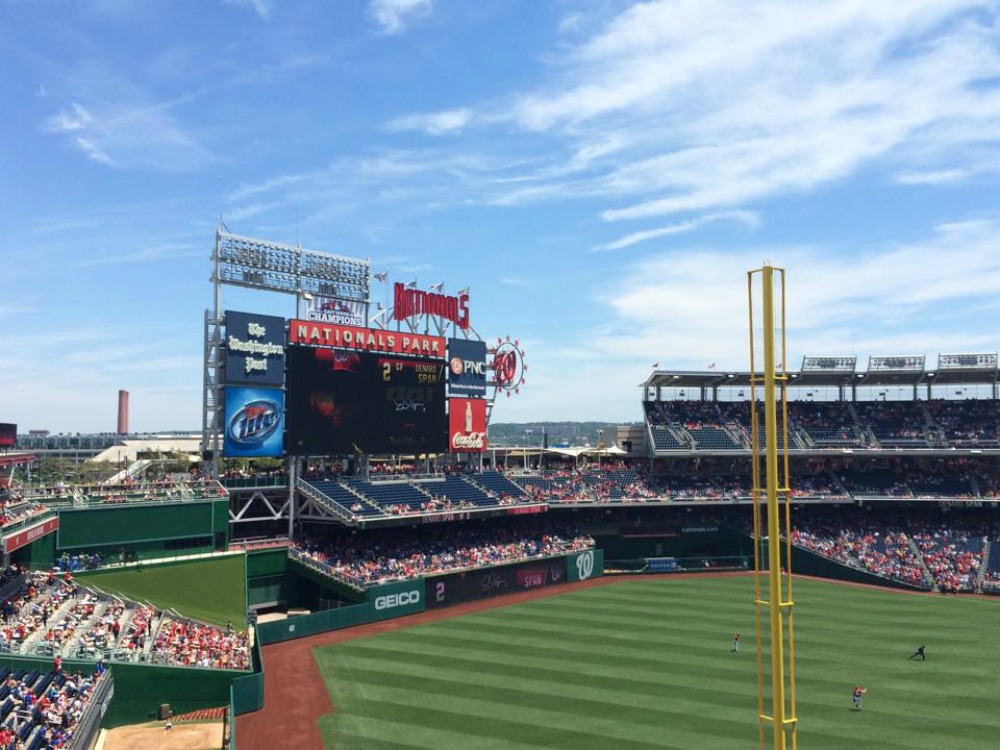 Scott had to work Monday afternoon and evening so we decided we would check out Annapolis for a few hours before he had to be at the golf course. It was a very pretty city but also pretty crowded for me…there were cars parked everywhere with very narrow streets so it kind of freaked me out. We didn’t spend much time there before we had to head back to the hotel.

Scott left for work and I decided it would be a good idea to run to Target. Not such a good idea. It was a little over 2 miles round trip, which was fine, but the heat index was over 100 degrees! Once I got back from my running adventure I went to the hotel gym for about 20 minutes to do a few upper body moves. Then I worked the rest of the day into the night.

Scott had to work Tuesday morning and our flight was scheduled to leave at 6:40 that night. I went to the hotel gym again and attempted to do lower body but I was still sore from all the walking and hiking so that didn’t last long! I instead just came up with this hotel room workout!

When Scott got back we headed towards D.C. We got to the baggage counter around 4:30 PM and was told our flight was delayed an hour. Well, an hour turned into 4 hours. We didn’t leave until 10:30 PM, so we didn’t get home until around 2 AM. So much for taking an earlier flight so we had time to get back in the groove at home!

Oh, and we ate at the same restaurant 4 times in D.C. It was called The Protein Bar and their food was TO DIE FOR. We even got a little punch card after going there twice. Unfortunately, we couldn’t fill it up because we had to leave town but I gave it to someone in the restaurant and it MADE THEIR DAY. They now get a free meal after only having to buy one more! We also didn’t use all of the money we had on our metro cards so we gave them to other riders. It’s very easy to brighten someones day with something even that small. Always think about how you can help others!

So, that was our trip in a nutshell.

Have you ever been to DC? What was your favorite part?