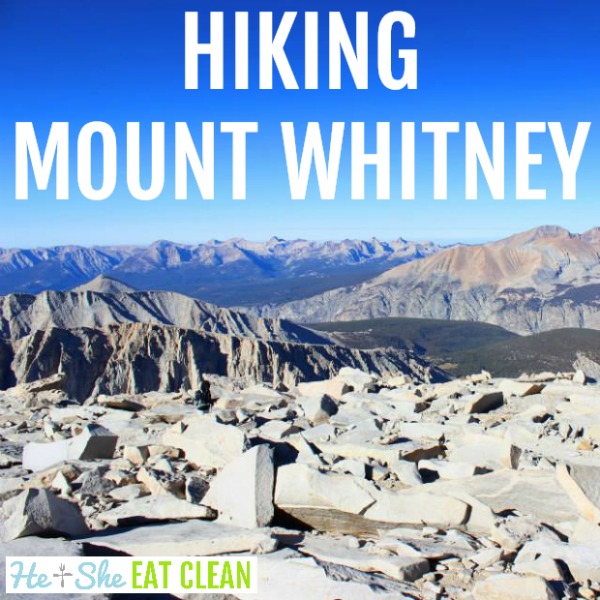 Standing at a height of 14,505 feet, Mount Whitney is the tallest peak in the lower 48 – which means we conquered the highest mountain in the lower 48! Rumor has it that 70% of the people who attempt to summit Mount Whitney don’t make it there. Using the Mount Whitney Trail (which is the one we did) the elevation gain is 6,137 feet.

This trip to climb Mount Whitney and visiting Tahoe was part of our trip to Yosemite National Park in September. Side note, when we got back home they were talking about fires in Tahoe on the news! We dodged bad weather (rain, hail, and snow on Whitney and fires in Yosemite and Tahoe) three different times on our trip! Little did we know we would be back to Yosemite National Park a few months later considering a possible move.

Similar to Half Dome, permits are required to climb the mountain and getting one is a story itself! 😉 You can learn more about the permit process here.

On Monday morning (September 8th) we drove from Mammoth to Lone Pine to hike Mt Whitney. We stopped by an outdoor store to rent hiking poles for me (Scott had already bought some in Mammoth) and also stopped to eat breakfast/lunch at Alabama Hills Cafe. We got a late start (on purpose because of weather) and as we were hiking up to our campsite the hikers that were coming down told us they were not even able to make it to the top of Mt Whitney because of the weather. 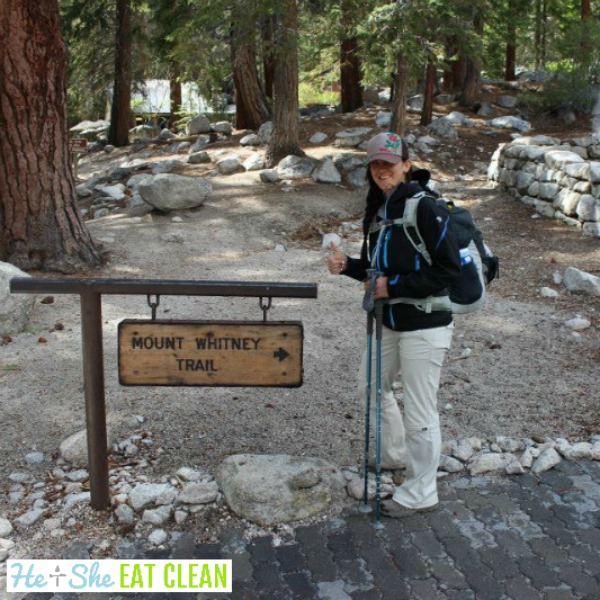 First, our plans were to do this as a day hike but the weather kept changing so we decided that we would do it as an overnight hike. At that point, our plans were to hike up to the camp farthest up (Trail Camp) so that we wouldn’t have as much to hike the next morning. Well, heavy rain and hail prevented that from happening so we ended up having to camp at Outpost Camp, which was only 3.8 miles from the start, which meant we would have to hike 18.2 miles the next day.

We stayed dry for the most part but it started pouring on us the last half mile into camp. Once we got there we were soaking wet and exhausted. We didn’t even want to eat but knew that we needed to since we had to finish the trek in the morning – even farther than expected since we had to stop at the lower camp. It stopped raining just long enough for us to get the tent set up and as soon as we did, it started pouring again. Scott made us dinner in the rain and we went to bed around 8 PM.

Scott woke up around 3 AM and stepped outside the tent and couldn’t believe his eyes. The storm had moved out and the sky was absolutely clear. He woke me up (not like I was actually sleeping anyway!) and we decided that we would go ahead and start the climb up Mount Whitney. This was one of the best decisions we ever made! We were able to leave most of our stuff at camp and take just a few things to eat in our packs. 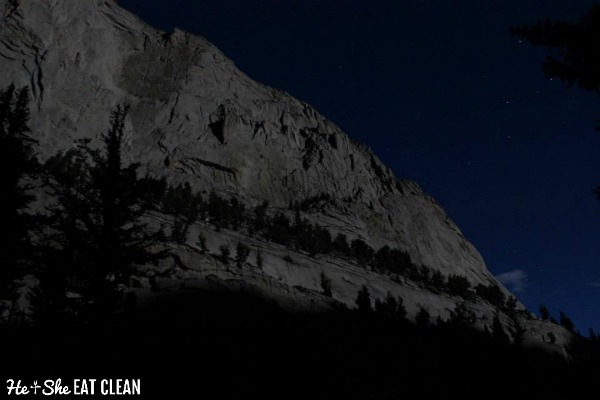 So much like we did with Half Dome, we started hiking with our headlamps and we were the only people for a while. We started up some of the switchbacks and looked back down to see others with their headlamps on. It was like a pilgrimage. It was out of this world.

The dramatic changing colors as the time passed was truly breathtaking. I still say to this day that I do not think I would have been able to finish this hike if we didn’t start super early like we did. I swear I was “sleep hiking” for part of it. We did have time to get acclimated to the elevation because we spent the first part of the trip in Mammoth but both of us did feel a little sick during parts of the hike but we listened to our bodies and took our time. 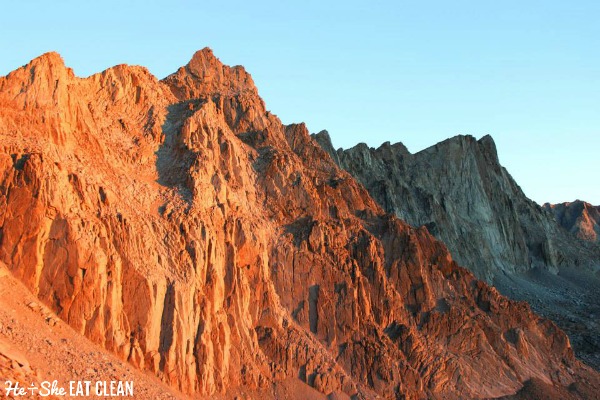 With every single step – every SINGLE step – we wanted to give up. Scott was usually a few hundred feet ahead of me but we were both thinking the same thing…just keep going. One foot in front of the other. Each time we did “meet up” again we contemplated giving up and just turning around but we pressed on. I KNEW that if other people had done it before us that we could too. It’s hard to describe but it was almost like an out of body experience. 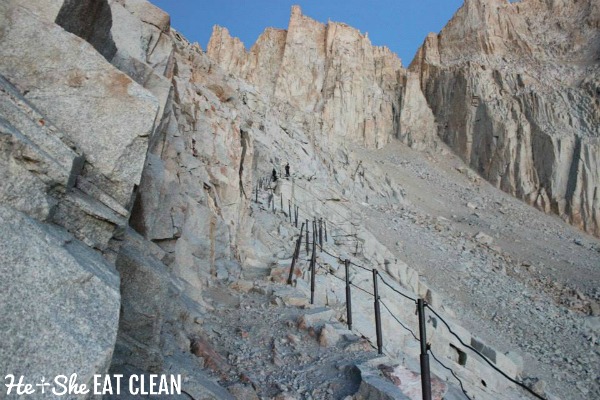 After climbing the 99 switchbacks we reached Trail Crest. I was so excited because it said we only had 1.9 more miles. That gave me a big push to keep going – Scott had the opposite reaction to the 1.9 miles we had left. 😉 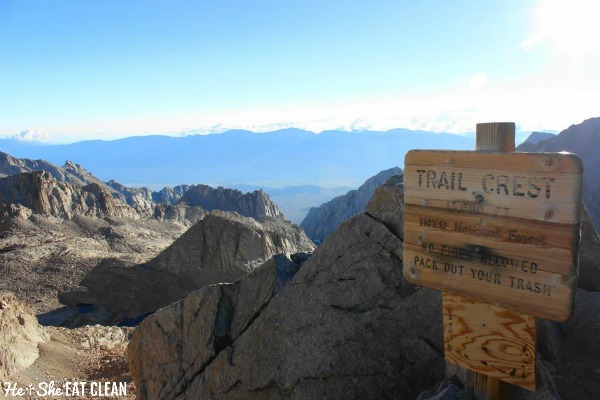 Can you see me? This was during that “only” 1.9 miles left! The last 1.9 miles were very difficult, maybe because we were actually waking up and realized we were actually hiking. We both talked about how we were basically hallucinating during the final push to the top. 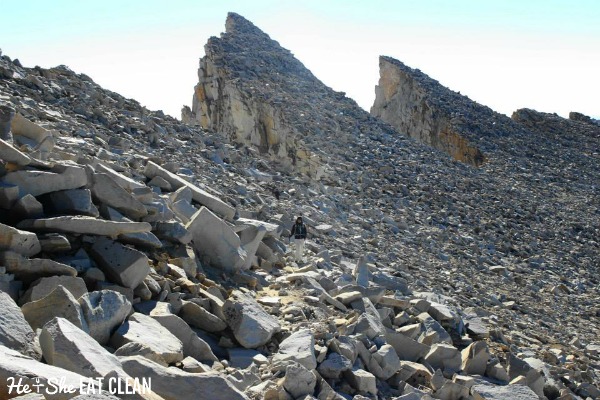 Once we could see the hut I finally believed that the top of the mountain actually existed. 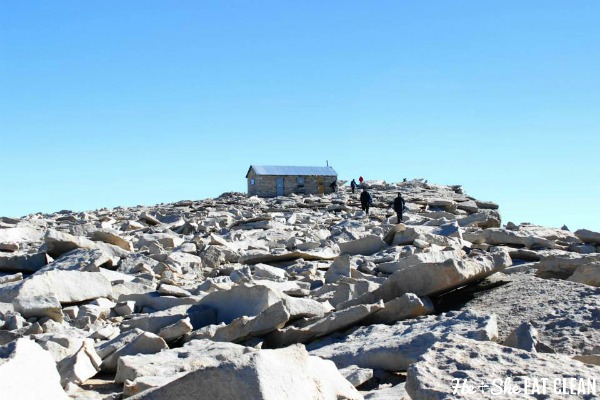 It really hadn’t fully hit us yet but we just climbed the highest mountain in the lower 48! 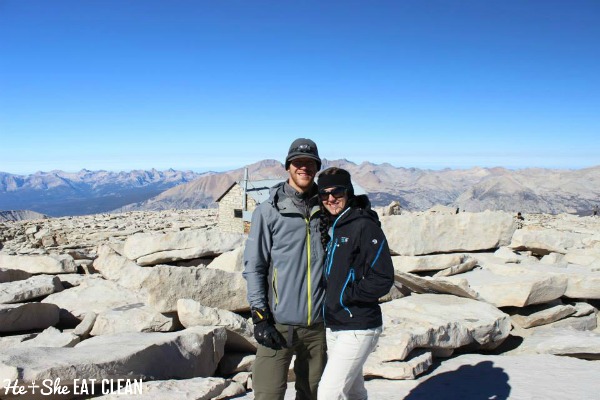 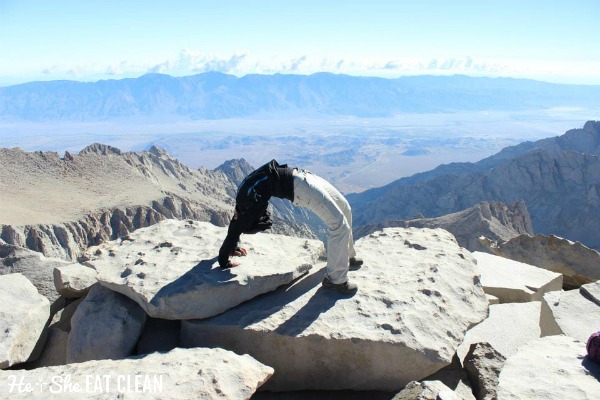 The picture below was on the way back down the mountain. 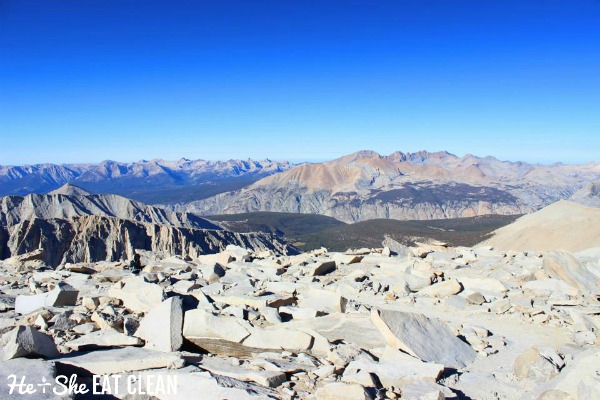 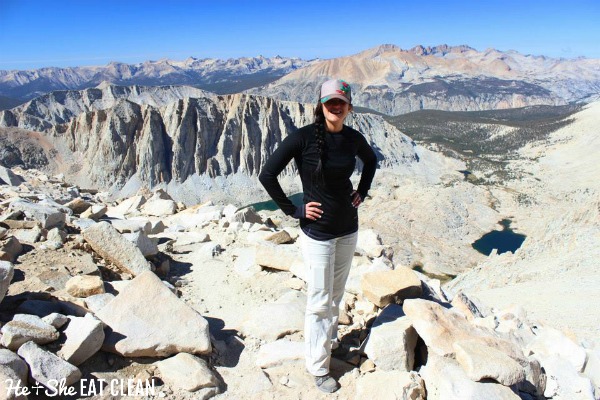 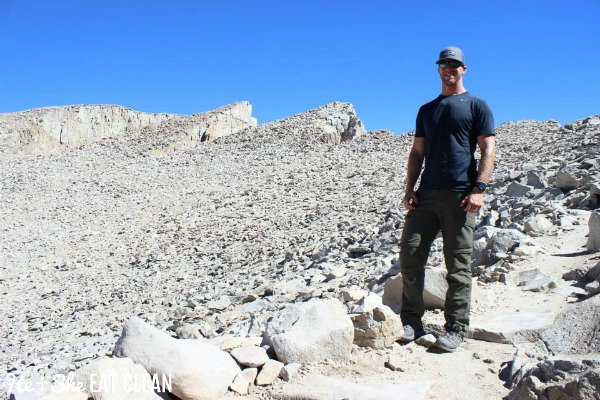 This was when it really hit me. It was really cold on top of Mount Whitney but we had to start shedding layers on the way down. We stopped and I was just giddy that we just climbed that mountain. It was SUCH an amazing feeling. 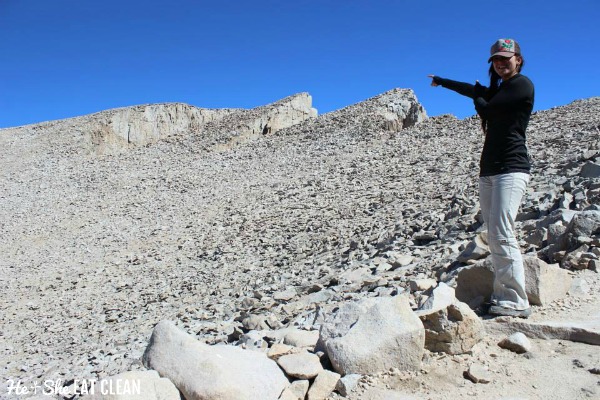 Once we got down back to camp we had to finish packing up and then we hit the trail to leave. The trek down obviously wasn’t as hard as going up but it was still difficult and we were tired. We both rolled our ankles a few times and I really thought that we would never make it down, even when we only had one mile to go.

We made it down, visited the Whitney Portal Store and made the trek all the way to Tahoe to fly out (a five-hour drive!).

We were going to take it easy in Tahoe since we had just climbed Mt Whitney (and hiked over 100 miles) but that changed when we woke up Thursday morning and decided to do the Rubicon Trail (10 miles) and kayak.

We ate at Base Camp Pizza twice while we were in Tahoe. Highly recommended – it was delicious! 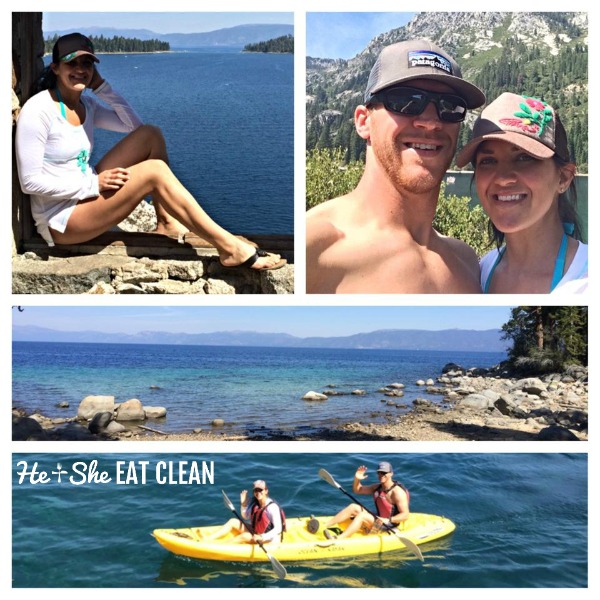 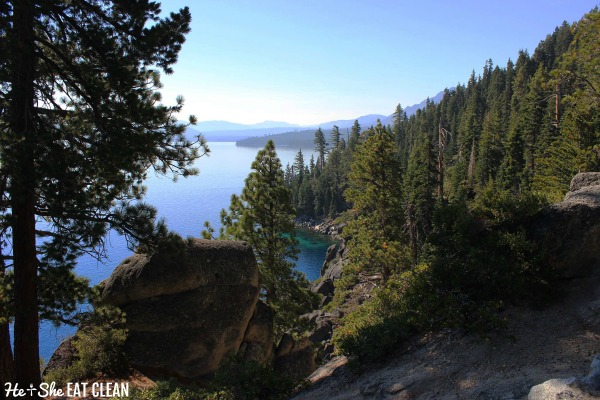 Many people ask what we do to prepare for our hiking trips. Honestly, we don’t do anything different from our normal workout routine. We work out similar to the way the She Sweats 12-Week Transformation is structured with weight training and cardio. Closer to the trip, we may steer more towards the She Sweats 12-Week Run Builder, trading in some of the running for incline walking/sprints but we don’t spend hours a day working out (unless we are hiking). It’s just not necessary or healthy for most people.

UPDATE: We wrote an entire post on how to get in shape for hiking!

I just found this picture of where we signed the register on top of Mount Whitney. We were brain dead by the time we got there and when Scott asked me what he should write – he wrote exactly what I said. That’s what happens after two weeks of non-stop hiking and climbing the tallest mountain in the lower 48. 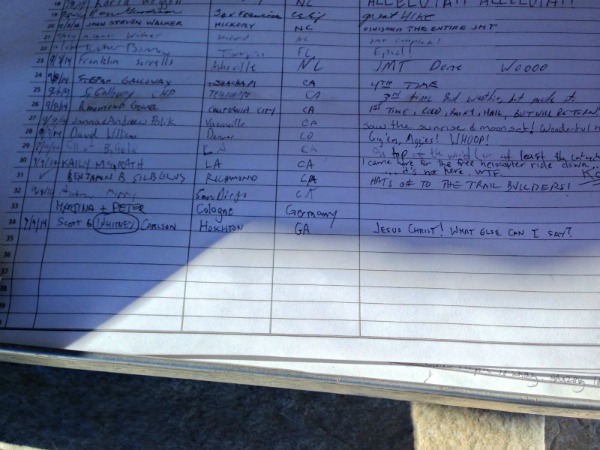 « 8 Day Itinerary for Yosemite National Park (Including Half Dome!)
5 Reasons Why You Need A Fitness Plan »