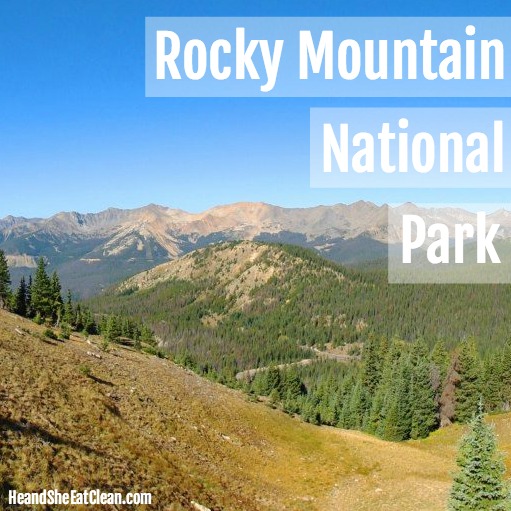 Thistrip is what started our obsession with hiking...

We had a hiking trip planned for NC and VA but the weather started to look pretty bad.  On the Thursday night before we were going to leave we just randomly started looking at other trips we could take because we both had the week off and we really wanted to go hiking.  We both want to visit all the National Parks so we decided to see how much it would be to visit one.  They were all pretty expensive but then we came across $99 flights to Denver, CO.  A buddy of Scott’s (from high school) lives near RMNP so he sent him a message to tell him we were considering flying out to hike in RMNP.  He told us to come out and he would hook us up with a great rate on a room.  We booked our flights and hotel Friday night at midnight to fly out Sunday morning.  Needless to say, we were running around like crazy on Saturday trying to get ready for this VERY “last minute” trip.  BONUS: Scott had a $100 voucher for the flight and we were upgraded for free to a room with a full kitchen!

We flew into Denver and stayed there Sunday night to check out the city and go to a baseball game.  We went to the Rockies vs Padres game Sunday afternoon.  Coors Field was beautiful! We can now check that stadium off our list (we want to visit all major league stadiums in the U.S.).  After the game we explored downtown Denver and discovered the biggest REI I have ever seen!  We woke up and checked out Monday morning – finally headed to Winter Park! 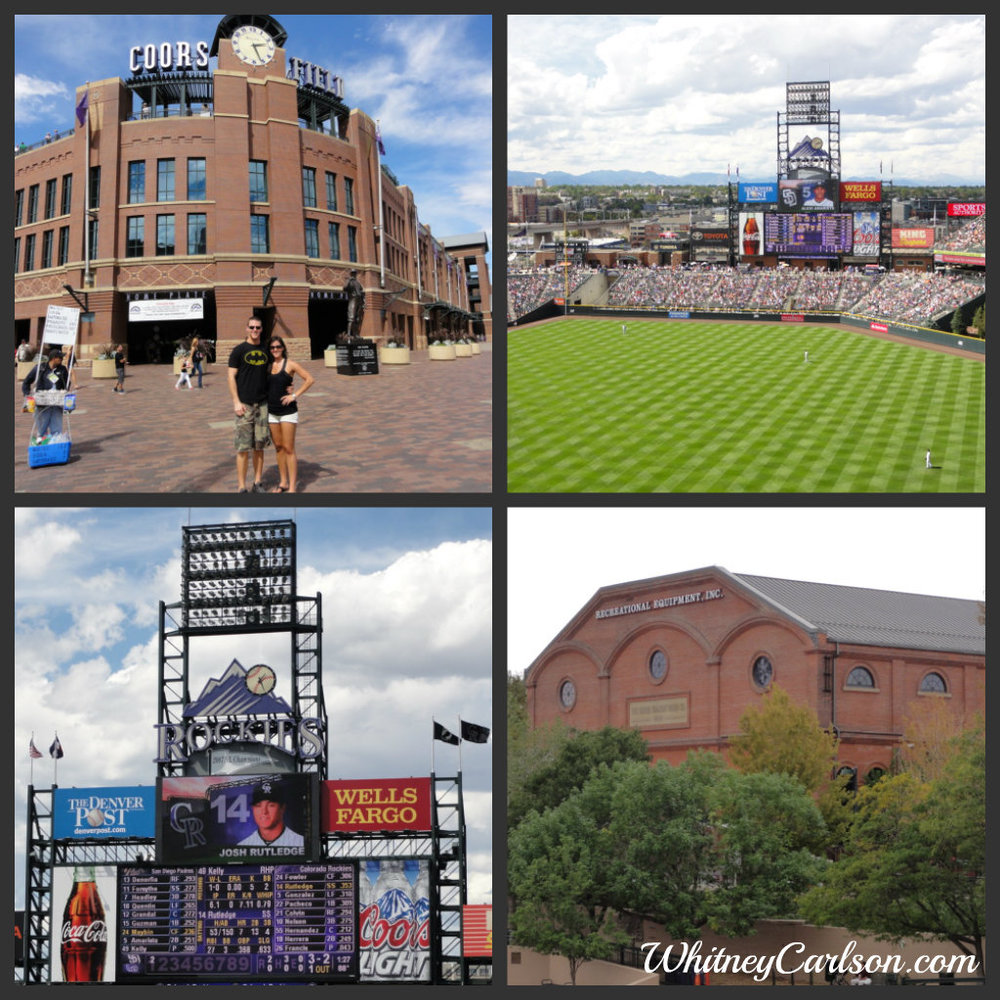 We didn’t want to do too much the first day because of the change in altitude so we drove along Trail Ridge Road to check out the park.  We went into a visitor center when it was sunny, we came out 10 minutes later and it was pouring!  The rain only lasted for about 20 minutes so we were able to fit in a short hike.  It was hard to catch our breath for the first 10 minutes or so of each hike but after that everything was fine!  I found it interesting that the recommendations they gave on how to deal with the change in altitude are also some of the clean eating principles (eat every few hours, drink a lot of water, avoid processed foods, etc)!

As we were hiking Monday, there was a man who was hiking with a cane and he had two people helping him (I assume they were his children).  He wasn’t that old but you could tell that something was wrong (maybe his back).  I overheard his daughter ask him if he was okay, and he said “Yes! Of course, no need to stop, I’m doing just fine”.  Then they stepped out of the way to let some people go around and he said “Oh, we are just stopping to cool off a bit” (he was joking – it was 43 degrees outside).  This literally brought tears to my eyes…here is a man who has EVERY EXCUSE in the world to sit at home and be unhappy but he was outside, enjoying nature, exercising, and was SO HAPPY.  This also reminded me of a man we encountered last year while backpacking in Boone, NC.  He was 80 years old hiking up a trail considered “strenuous”.  He chatted with us for a few minutes and told us that he hiked the trail every Saturday before making his weekly trip to the grocery store. 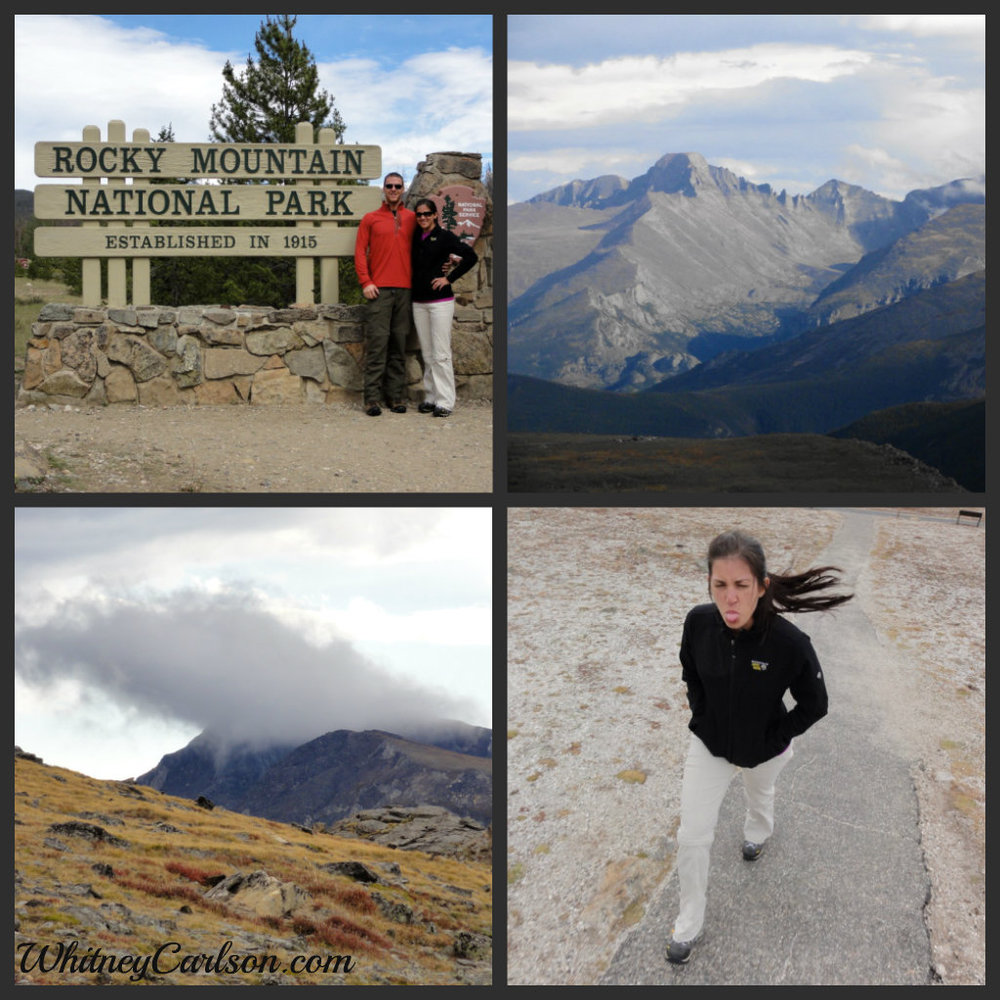 We did a 7.76 mile hike that took 3 hours and 44 minutes.  It was beautiful!  The hike took us to a big meadow where you could see all kinds of wildlife.  We also saw an old cabin and a beautiful creek/waterfall.  I thought this hike was pretty tough but it was nothing like what was about to happen on Wednesday… 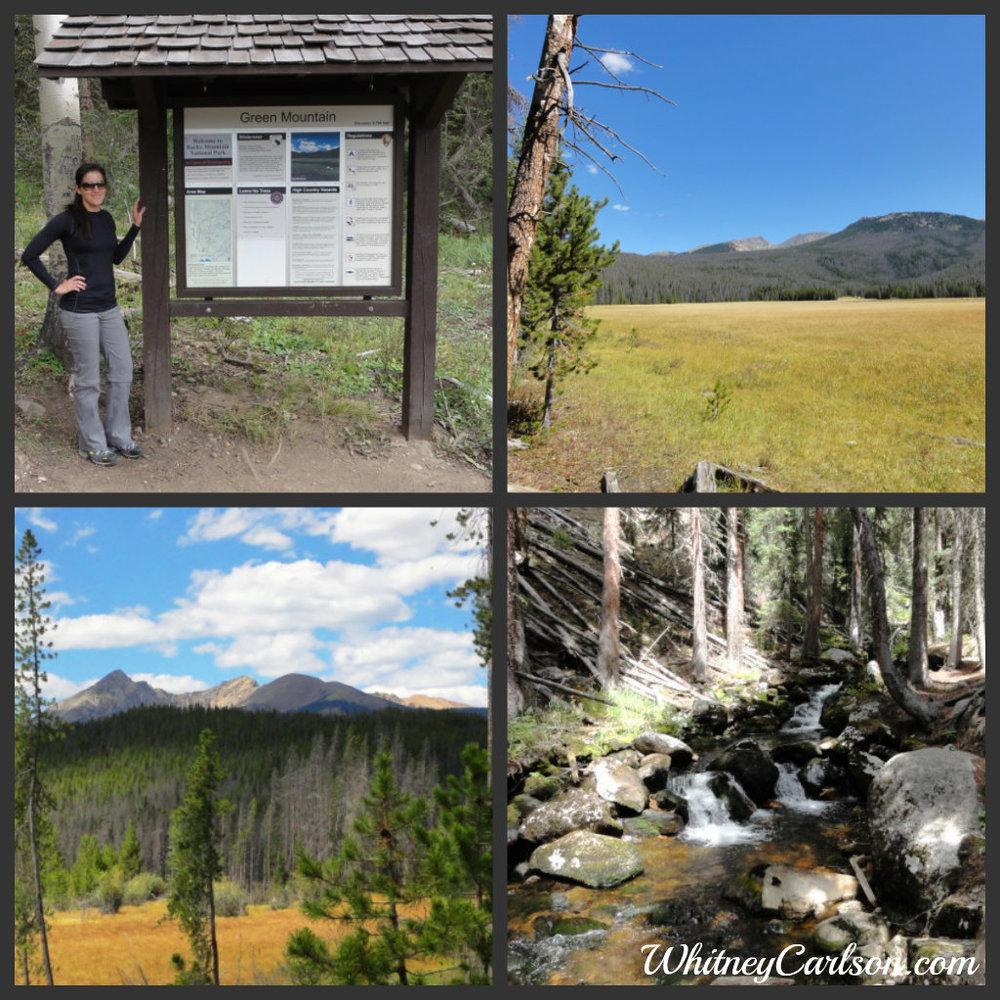 Scott decided that he would climb up the rocks on the side of a mountain…so, I decided it would be photo shoot time! 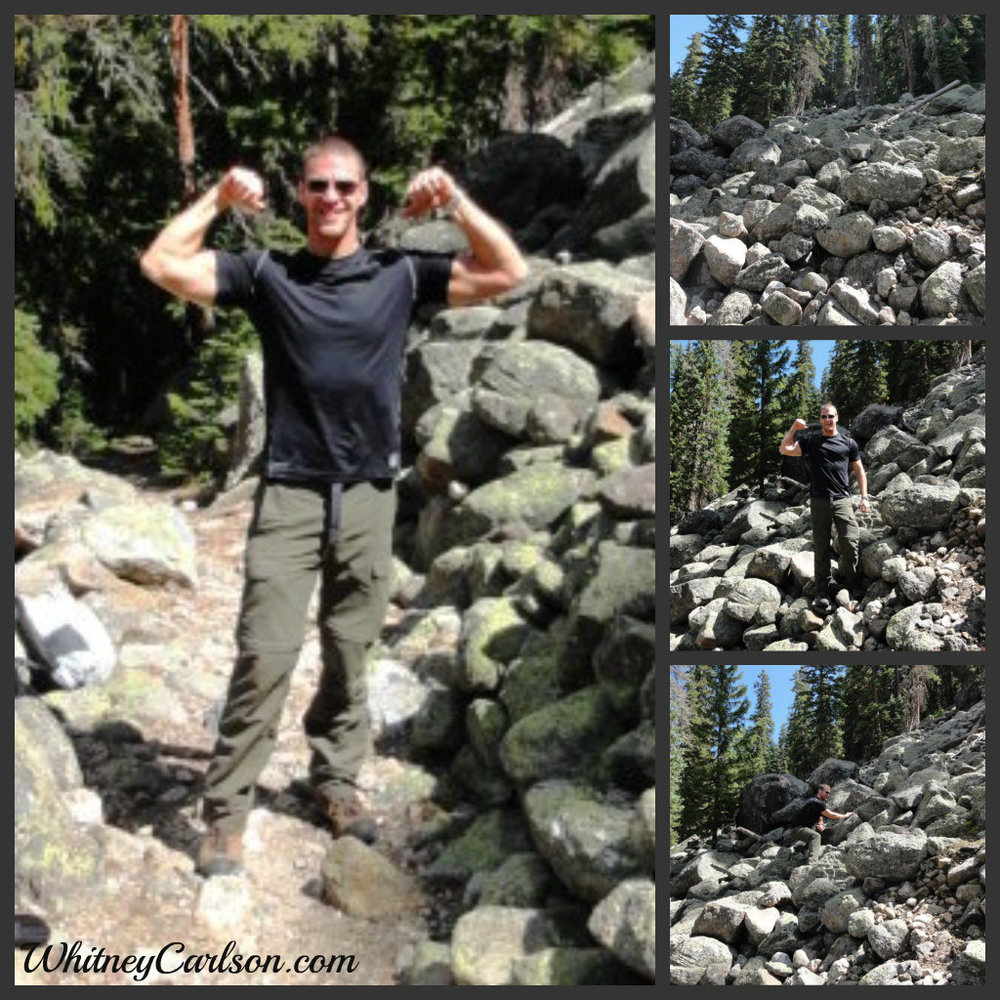 We did a 9.53 mile hike that took 5 hours and 43 minutes.  This hike was straight up the mountain… Mt. Ida.  We saw marmots playing in the rocks we were climbing up – they were so cute!  While we were at the summit another couple came up and we ended up hiking back down with them since there were warnings everywhere that people get lost on the trail (at least we would be together)!  Anyway, she was wearing a heart rate monitor…when we finished our hike it read that we had burned 3,175 calories!  It was a very difficult hike but worth it because of the breathtaking views at the top. 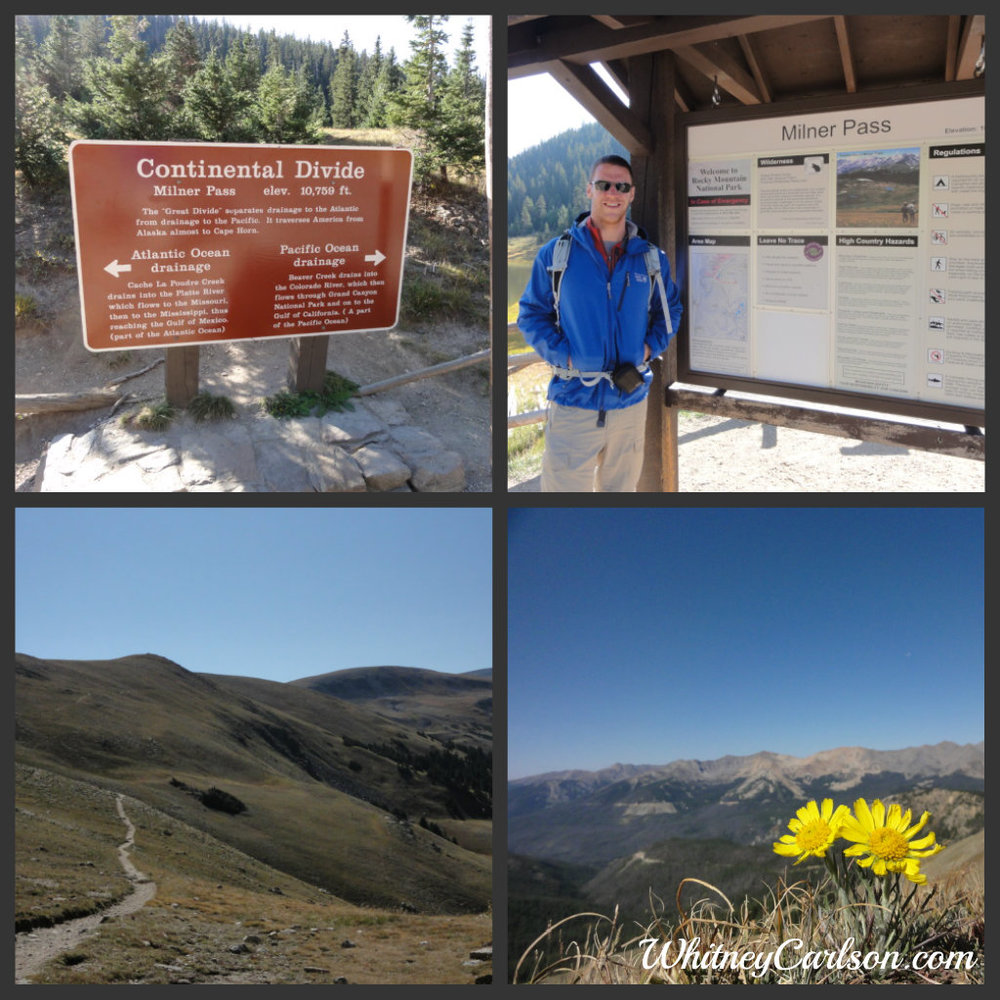 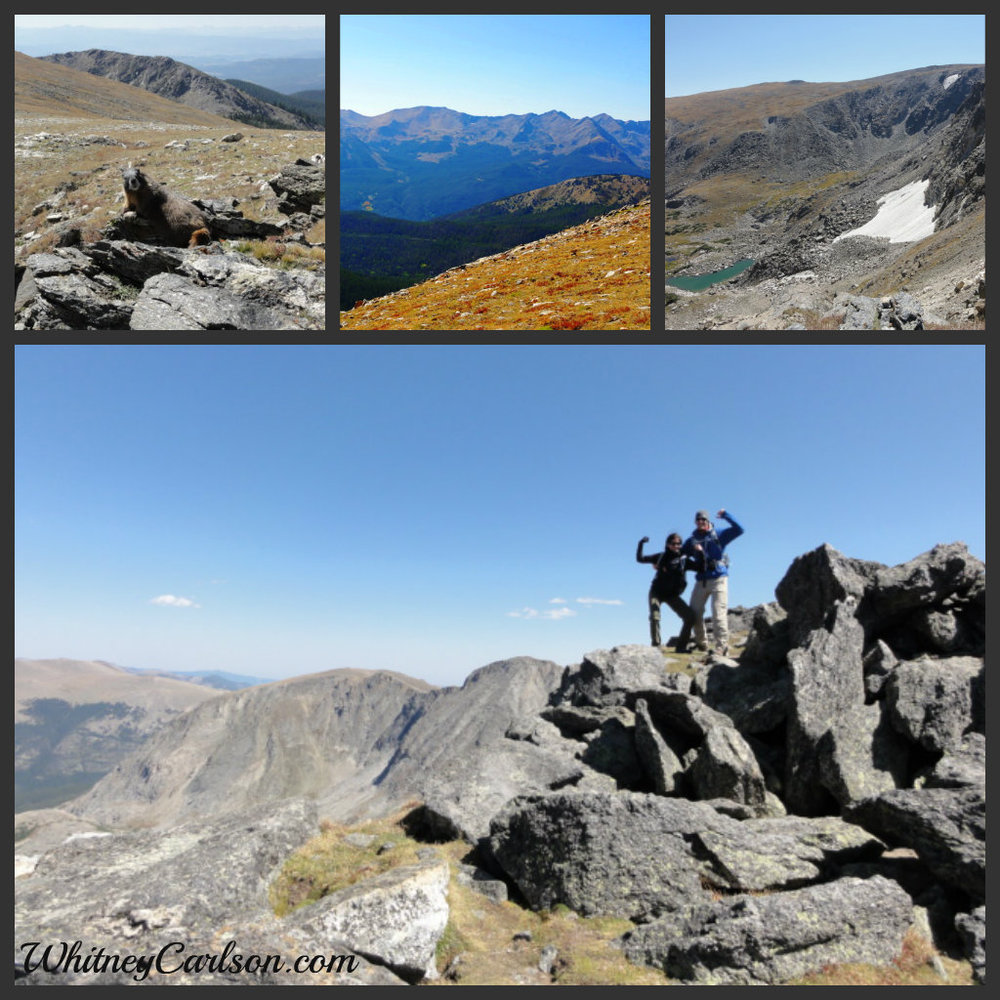 Scott went downhill mountain biking with his buddy from high school.  After they finished mountain biking we ate lunch in Grand Lake and then headed back into the park.  We went to the Estes Park side of RMNP and hiked to Dream and Emerald Lakes and Alberta Falls.  Once again, very pretty!  After that, we drove to Boulder for dinner.  After dinner, we took another random trip to a small town in the middle of the mountains called Black Hawk.  We went here to scope out the casinos…Scott and I have a lot to learn before we go to Vegas!  Needless to say, we ended up back at the hotel at 3:30 am. 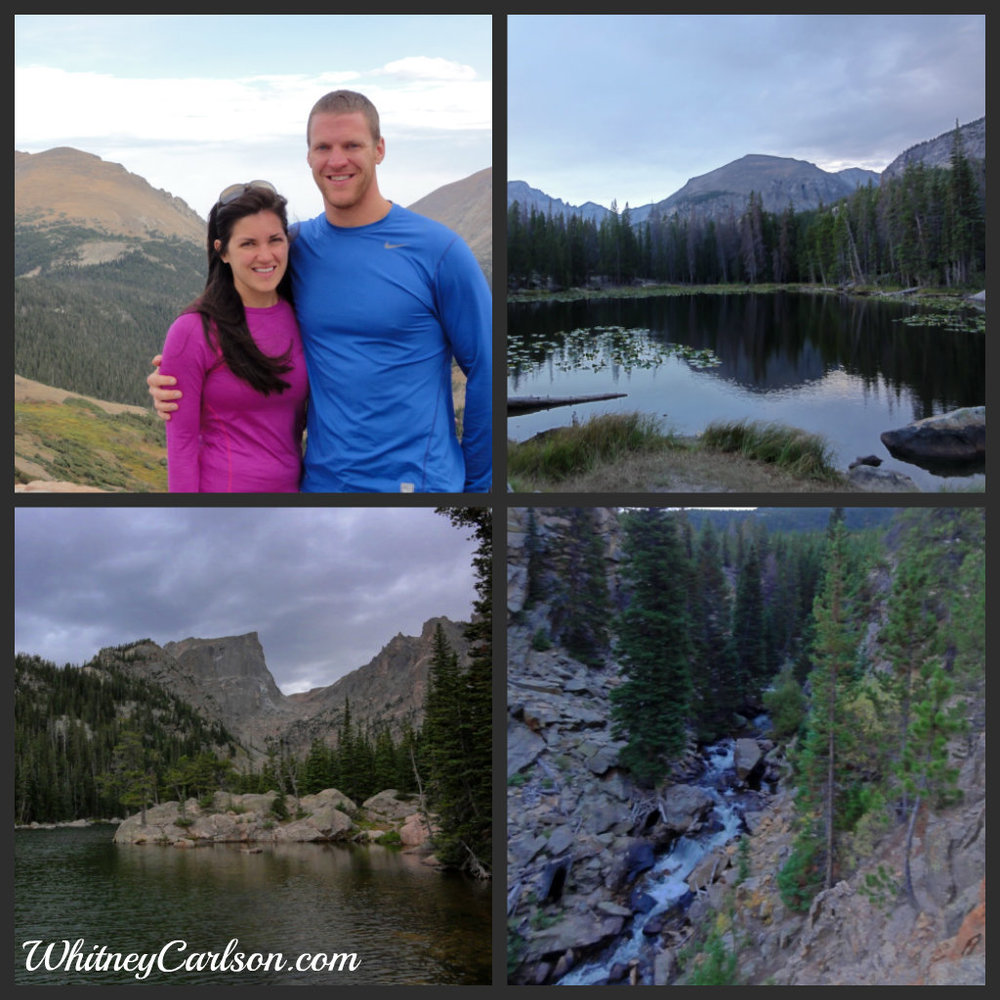 We booked a late flight so we would have time to spend in CO on Friday.  We visited downtown Winter Park, went moose “hunting” (I really, really wanted to see one – but never did) and then stopped by Red Rocks on the way to the airport.  Winter Park is absolutely beautiful.  The little village there is precious and I bet it is even more amazing in the winter with snow everywhere!  We couldn’t really see much of Red Rocks because they were setting up for a concert but from what we did see it looked pretty cool!  Our flight was scheduled to leave at 7:05 pm, when we got to the airport we learned there was a 50 minute delay.  That 50 minute delay quickly turned into a 2 hour delay.  So, once again, we had another night where we were up until after 3 am!  It was 4 am before we got home from the airport! 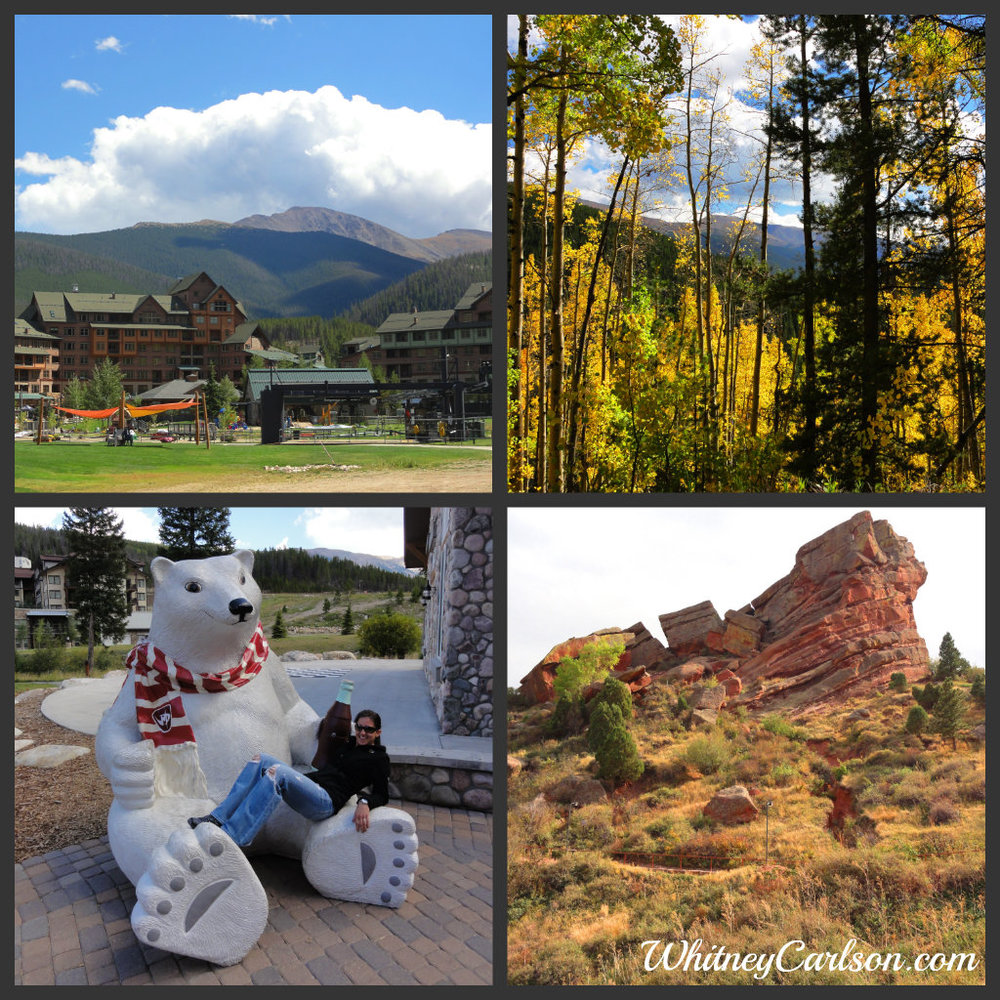 A lot of people have asked what I ate on this trip.  We packed the food we needed for hiking (protein bars, granola, trail mix, nuts, etc). Thankfully, we had a full kitchen, so we ate breakfast in the hotel each morning.  Our breakfast consisted of eggs and oatmeal.  We left each morning after breakfast to go hiking so Meal 2 and Meal 3 (and sometimes Meal 4) were on the trail.  Once we were off the mountain we would go out for “dinner”.

If you are going on a trip, this post may help you with what to pack!

Which National Parks have you visited?  Have you ever been to Rocky Mountain National Park?  If so, what was your favorite part or hike?