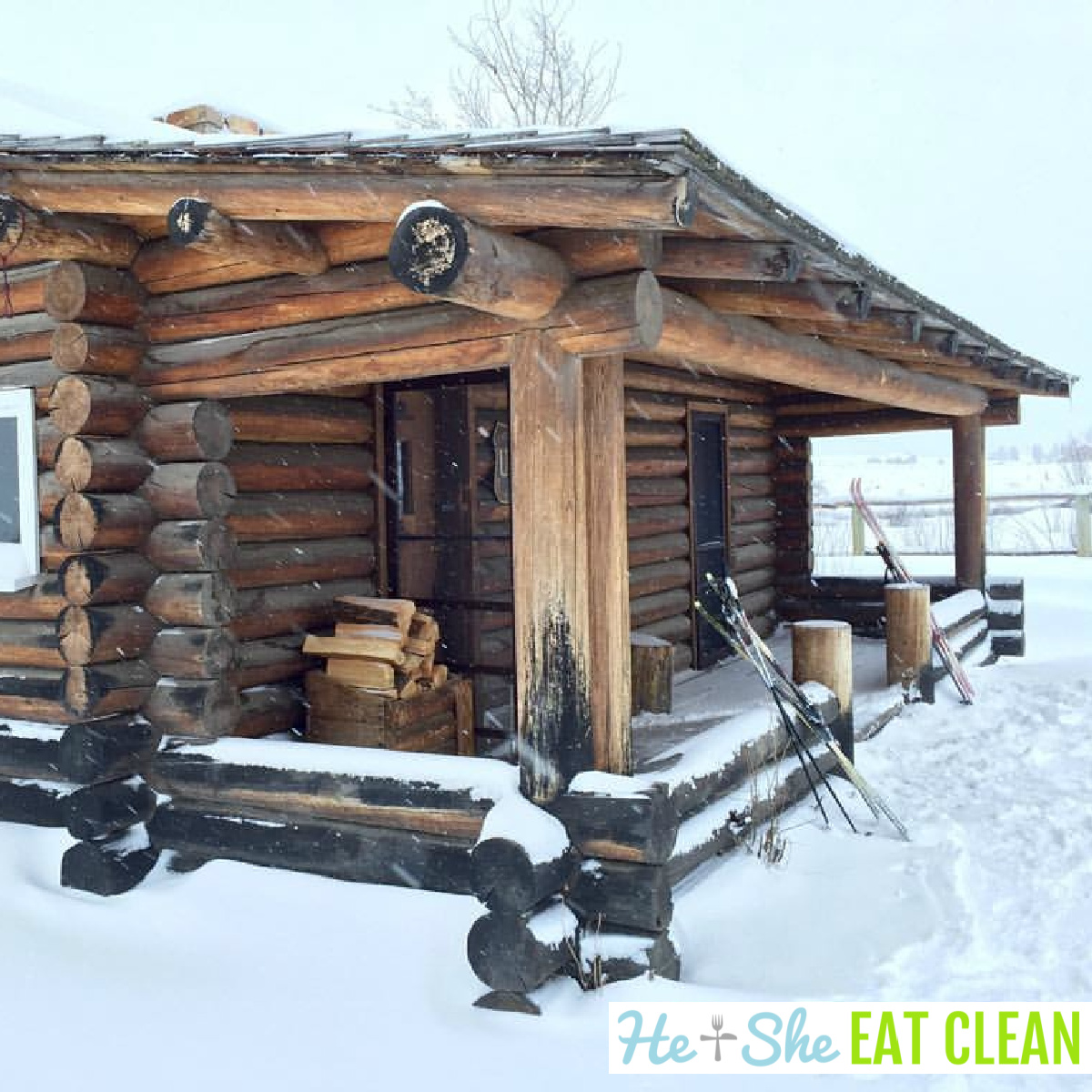 Scott is lucky to have a job that closes for three weeks in December (because the other months of the year are crazy for them!). We try to go somewhere each year as our anniversary and Christmas present (our anniversary is December 1). Luckily, Jackson Hole has some pretty awesome ski deals this time of year too so we were able to each get a $300 flight credit and a ski-free package.

We plan on touching on this more in future posts but travel is one thing that we do spend money on. We save money throughout the year so we can travel without debt. Instead of getting each other presents, we choose to travel. I will also share how I pretty much paid for this entire trip by selling things a few months before the trip. It wasn’t planned that I was going to do that but I just woke up one day and had different plans for things in the house. 😉

We left on December 14th and flew into Jackson Hole with a connection in Denver. Our flight was delayed and we almost missed our connecting flight but thankfully we were able to sprint through the airport (just imagine the airport rushing scene from Home Alone) and they let us on the plane! We couldn’t breathe from running so fast and carrying our bags (instead of rolling them) through the “mile high” airport but we made our connection! Once we got to Jackson we unpacked and went grocery shopping…and I snuck in a backbend picture downtown!

Jackson Whole Grocer – Scott is obsessed with this store. We ate here for every single meal except one.

We go grocery shopping every single time we travel in order to save money. While traveling, we try to only eat out once a day. We posted a few of these pictures on Instagram (so if you aren’t following us there, you should!) but we wanted to share them here as well. We purchased groceries to make breakfast each morning (at least a $20 savings PER day), plus things to snack on like protein bars, Greek yogurt, and dried fruit.

Remember I said we ate at Jackson Whole Grocery for every meal except one? That one exception was Pinky G’s Pizza!

Scott skied for three days and I worked (I don’t downhill ski). 🙂 I did ski one day when we came last year but I’m over trying to make myself like skiing. I have embraced the fact that it isn’t fun for me and that’s okay!

Below is another picture of some of our food (all from Jackson Whole Grocer). We make healthy choices for the majority of our trip (just as we do at home) but we also eat things like pizza (above), burritos, and tacos.

On Friday we packed up and headed to West Yellowstone to visit with my cousin who moved out there a few years ago. That afternoon we went cross country skiing to a backcountry cabin where we stayed overnight. I mean, seriously, how amazing is this cabin? I am so in love with it.

We packed our snacks: Kodiak Cakes, Rise Bars, Kind Bars, and Steve’s PaleoGoods jerky and dried fruit. It was quite an uneventful night, which is exactly what we wanted. The boys went back out to go skiing again and I finished reading Rich Dad Poor Dad.

The cabin didn’t have any electricity so we (okay fine, the boys) had to keep the cabin warm with firewood. This picture proves that they actually really liked chopping wood.

The next morning we packed up and skied back out. After eating a rather large breakfast/lunch at Running Bear Pancake House we went back out to ski at the groomed ski trails in West Yellowstone. Honestly, I didn’t even want to go but being as frugal as I am, I wanted to get as much use as possible out of the skis we rented! I am SO GLAD that I went. We had a fantastic time and my cousin captured some awesome pictures.

On Sunday we headed back to Jackson Hole for one night in order to fly out the next morning. And that is when all the fun started…on the way back to Jackson Hole the snowdrifts in Idaho were pretty much out of control so we were slightly frightened the entire trip back but we made it safely and ate at Jackson Whole Grocer once we made it in town (surprised, right?). Then we went skiing again. What started out as just a small stroll turned into cross country skiing to Taggart Lake. We snowshoed to the lake last year but it was definitely a different experience skiing there! Below is a picture that Scott snapped.

We also found the house we want (just a smaller version). I have never seen anything so beautiful before!

We returned the skis (sigh) Monday morning. While we were at the store we got an alert that our flight was delayed but with the new arrival time we would still make our connecting flight. We headed to the airport after driving around town for a bit. Once we got onto the plane and they shut the door we received another text message with a new flight status. This time we would not make our connecting flight. Once we realized this we asked to get off the plane but they wouldn’t let us since the door was shut. Our thinking was that we wanted to stay in Jackson instead of being stuck in Houston (where our connecting flight was). We finally landed in Houston and our connecting flight left without us. We were told to go to customer service, which we went to promptly. I’m glad we did since they closed that customer service line after us! Scott called United to see what our options were (since the line wasn’t moving) and they had us booked on the 7 am flight the next morning. While Scott was on the phone with United I called Southwest because I found flights with them that left that same night. I call Southwest, book the flight, but then we couldn’t find Southwest. Turns out it was a different Houston airport! So now we were stuck with NO flight home since United canceled ours to let us fly out with Southwest. We waited to talk to the United agent and after about two hours of waiting in line and talking with manager after manager, they were able to get us on a plane the next day at 9:40 am. This was a flight that one person told us was full earlier and another agent told us would be $1,000 per ticket to re-book (yes, we got two different answers). We were put in a hotel in Houston with food vouchers so we ate tacos and drank wine at midnight after finally getting in from the airport.

The next morning we took the shuttle to the airport to catch our flight. We learned once we got there at the 7 am flight (the one they re-booked us on and we canceled) was canceled AGAIN that morning due to fog. Crazy how all that works out! I felt so bad for causing extra headaches for trying to book with Southwest but if I hadn’t done that we could have had two canceled flights. The good news is we made it home – the bad news is that our bags didn’t make it with us. They were delivered early the next morning but United failed to let us know they were dropped off so they sat in the rain at our front door. It’s a funny story to tell now but it definitely was not funny at the time!

I can’t think of any gift that would be better than a trip like this.

I’ll leave you with one more beautiful picture of Jackson Hole. If you haven’t been there yet, put it on your list!