This Four-Layer Chocolate Dessert Recipe (also known as Four-Layer Delight) has been lightened up with healthier ingredients but does not skimp out on taste. The texture is light and fluffy and it is a crowd-pleasing dessert. 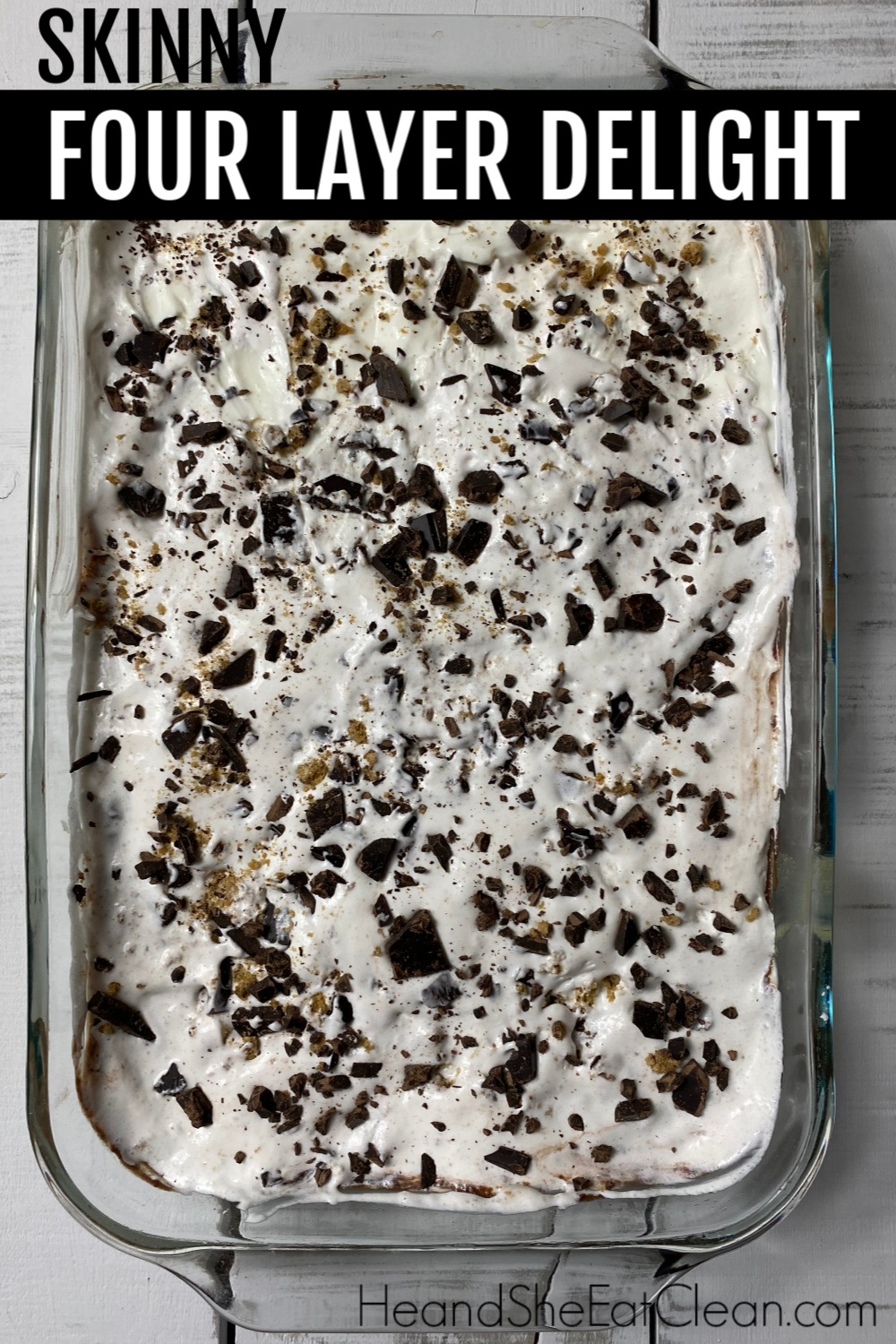 This four-layer chocolate delight recipe is a remake of Scott’s favorite dessert that his mom makes. Scott has mentioned for years that we should try to make it healthier and “clean it up” and we finally did that over the holidays! We’ve made this skinny version multiple times for friends and family since then and they have all loved it.

This dessert does have four layers (obviously!) so it looks like it’s hard to prepare but don’t let that scare you because it really doesn’t take that much time! You will need to prepare in advance though because you need to strain your Greek yogurt overnight.

We have also used this exact recipe but split everything in half for a smaller portion and it was still fantastic and the perfect amount for just two of us with plenty left over. You might find this printable helpful: How to Split a Recipe in Half

HOW TO CHOOSE BETTER INGREDIENTS

When we set out to make this a healthier dessert we had to do a little research on which products to use in place of the original recipe. These swaps typically are more natural, contain less sugar, and much fewer calories.

In place of cream cheese in the original recipe, we use Greek yogurt. Yes, Greek yogurt! You will need a cheesecloth to strain your yogurt but once you have it strained it has the same consistency as cream cheese. Trust us no one will know! We’ve also used this swap in our Grape Salad Recipe.

Skip over the Cool Whip brands you are used to and look for Truwhip. They have original, skinny, and vegan Truwhip. They contain no artificial colors or flavors and no high fructose corn syrup.

Another brand to try is Cocowhip which is a coconut whipped topping from SO Delicious. It is dairy free and made with organic coconut oil.

Have you read the ingredients on the back of your favorite pudding lately?! WOAH! Creating this recipe sent me on a hunt for a cleaner pudding. The cleanest one we’ve found so far is this Simple Delish Natural Instant Chocolate Pudding that has no preservatives or artificial colors.

We replaced the powdered sugar from the original recipe with a combination of Stevia in the Raw and Truvia Brown Sugar Blend. You can use your choice of natural sweetener (coconut sugar is another option) but keep in mind that changing the sugar substitute will change the macros for the recipe.

This can be made with multiple different crusts. Scott’s mom typically uses a traditional flour-based crust, cookie crust or graham cracker crust. We decided to make ours with an oat flour crust and it turned out perfect. You could also try almond flour.

What you add to your crust is also customizable. We’ve done pecans, walnuts, and dark chocolate chips.

Topping options for this are endless! Dark chocolate chunks, broken cookie pieces, and/or pretzels are the perfect way to top off this dessert.

CAN FOUR LAYER DELIGHT BE FROZEN?

Yes, this dessert can be frozen. We made this before our trip to Jackson, Wyoming last year and didn’t want to eat it all before we left so I put it in a freezer-safe container and popped it in the freezer and 10 days later we ate it when we got back home. 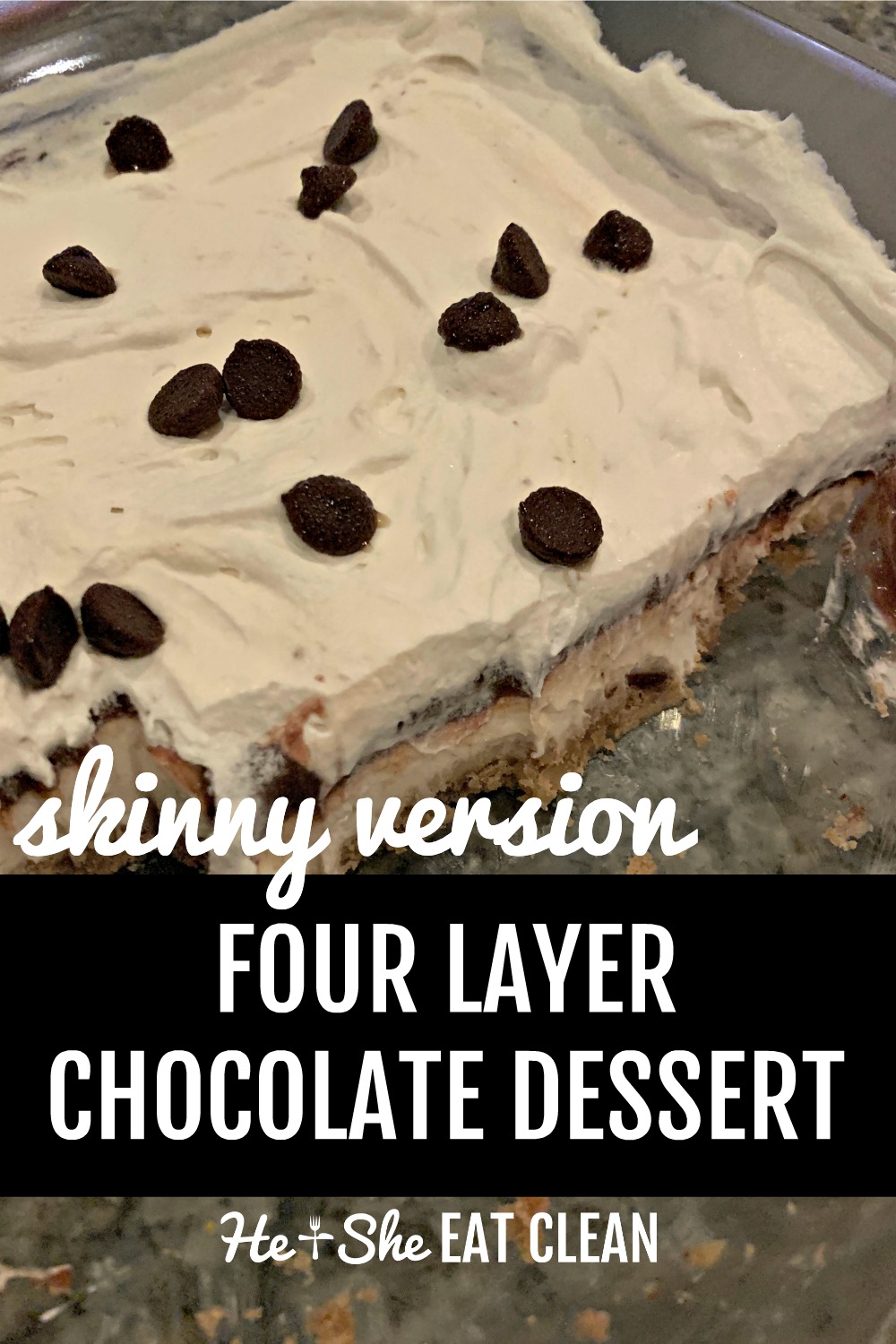 This Four-Layer Chocolate Dessert Recipe has been lightened up with healthier ingredients but does not skimp out on taste. The texture is light and fluffy and is a crowd-pleasing dessert.

PLAN IN ADVANCE: Remember that you will need strain the Greek yogurt at least 6 hours