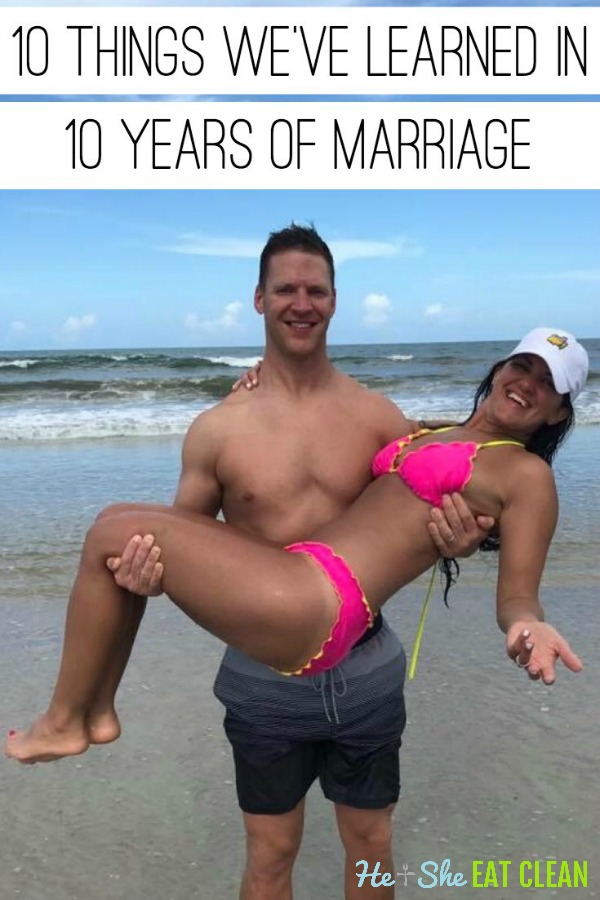 It’s December 1, 2017, our tenth anniversary. TIME FLIES. So much has changed but so much has also stayed the same.

Yes, we got married young. Yes, we were high school sweethearts. 😉 We are very similar as neither of us are people pleasers and we don’t really care what anyone else is doing, saying, or buying…as Scott’s mom likes to say, “we march to the beat of our own drums.” We do have some differences, but those are the things that make us compatible…for example, Scott is extroverted and I am quite introverted, so we do fine in social situations because I just let Scott do all the talking (and then re-charge away from people). 😉

I’m not saying that we have the perfect marriage, I’m pretty sure that doesn’t exist…but I do think that we have experienced and learned some things that could help others. Since this is a very special anniversary (10 years!), I wanted to do a post and sort of recap our 10 years and also share 10 things we’ve learned in 10 years of marriage.

P.S. We don’t exchange any gifts or go to expensive dinners…our “gift” to each other is always in the form of travel (usually to Jackson Hole!).

This list was so much fun to come up with and reflect back on the last 10 years. You’ll notice nothing that stood out to us had to do with material possessions…they are all experiences.

HIGHLIGHTS OF OUR MARRIAGE SO FAR (10 YEARS):

1. Our marriage is the most important relationship

3. But you do need to like some of the same things

If you don’t like to do any of the same things, how will you connect?  You have to have a few hobbies in common. We love to go hiking together. Any chance we get quality time to spend together, we spend it on the trail. This allows us to spend time together, disconnect and reflect on the important things in life.

Don’t forget that friendship is a very important aspect of a viable marriage and try to communicate with your spouse as you would a friend rather than coming at it from the perspective of husband and wife (which can be combative at times).

Sure, he might leave the toilet seat up or she might not put her dirty clothes in the basket right away. While it seems like a big deal at the time, it’s really not. Just put the seat down for him and put the clothes away for her. Let it go. Life is short and it’s not worth bickering about the little things.

5. Money, you have to be on the same page

Financial decisions must be discussed and you have to agree on a budget early on. Being honest about how much money is coming in and how much money is being spent or saved is key. Even though some people still have separate accounts when married, money is still a topic that has to be discussed prior to marriage and often during the marriage. Be transparent with your finances and have frequent budget reviews or meetings to get on the same page!

If one is a spender and one is a saver there is going to have to be some compromise. If you are both savers, you are probably okay. If you are both spenders and spend more than you make, you might want to seek outside counseling and develop a long-term financial plan. Scott and I were able to meet in the middle, he made me loosen up a bit on saving (in a good way!) and I made him tighten up on spending (in a good way!).

RELATED: How we became “rich”

Scott left a job that he didn’t like mainly due to a long commute for one closer to home and took more than a 30% pay cut.

I left my “stable” full-time job to work on the website full time and be a personal trainer.

We were both able to make these changes because of the way we handle our money. Just because someone has a lot of money doesn’t mean they are happy. Making more money won’t guarantee your happiness!

7. Never start the day off nagging or complaining

No one wants to wake up and hear someone nag or complain. We are all guilty of it and it’s not pleasant. Start the day off on a good note, don’t let you waking up on the wrong side of the bed rub off onto your spouse.  Find something to be grateful for and give acknowledgment to it first thing in the morning…for us, it’s simple, the sun comes through our bedroom window and provides light, warmth, and positivity to start off the day!  This may sound cheesy, but that positive experience first thing in the morning builds on itself as the day progresses.

8. Don’t try to change the other person

Think about how hard it is to change yourself and you will understand how hard it will be to change someone else. If you think there are things that your spouse could change, model the behavior you want to see and hopefully, they will catch on!  Also, realize that each of you WILL change as time goes by, so you need to accept that early on and love one another unconditionally.

When Scott started eating healthy and working out, he didn’t pressure me. He just did his own thing. I didn’t start until a few years after him, but he led by example and when I was ready to join the bandwagon, he was willing and eager to help!

RELATED: How to help your spouse eat healthier

9. Have a clear vision of what you want your future to look like

Do you want kids? Do you want pets? When do you want to retire? What does retirement look like to you? These are all important questions that need to be addressed. You could both have opposing viewpoints or goals and never even really know it!

Of course, I’m going to have to include compromise here! This is something that you will be doing on a daily basis and with almost everyone around you, not just your spouse! I’ll admit, I can be very stubborn and hard-headed but I’ve learned that I have to compromise occasionally. You might have to compromise on something small like where you are going to eat or something large like finances. Either way, take the time to listen to your spouse and come up with a solution that satisfies both of you!